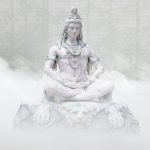 OM. We worship Lord Shiva, The three eyed one who is full of fragrance and who nourishes all beings. May he liberate me from death, just as the ripe cucumber severed from its bondage (to the Creeper)

Origin
This mantra is also called the Rudra mantra, referring to the furious aspect of Shiva; the Tryambakam mantra, alluding to Shiva’s three eyes; and it is sometimes known as the Mrita-Sanjivini mantra (lit., “Reviver of the dead”) because it is a component of the “life-restoring” practice given to the primordial sage Sukracharya after he had completed an exhausting period of austerity.. Its Devata (patron deity) is Rudra, i.e., Shiva in his fiercest and most destructive roopa or aspect. In the Vedas it finds its place in three texts – a) the Rig veda VII.59.12, b) the Yajur Veda III.60, and c) the Atharva Veda XIV.1.17

According to some puranas, the Maha mrityunjaya Mantra has been used by many rishis as well as Sati during the time when Chandra suffered from the curse of Prajapati Daksha. By reciting this mantra, the effect of the curse of Daksha, which could make him die, slowed, and Shiva then took Chandra and placed it upon his head.

This mantra is addressed to Shiva for warding off untimely death. It is also chanted while smearing Vibhuti over various parts of the Body and utilised in Japa or Homa (havan) to get desired results. While its energy protects and guides the initiates a mantra re-links consciousness to its deeper and more abiding nature and repetition of the mantra constitutes Japa, the practice of which develops concentration that leads to a transformation of awareness.